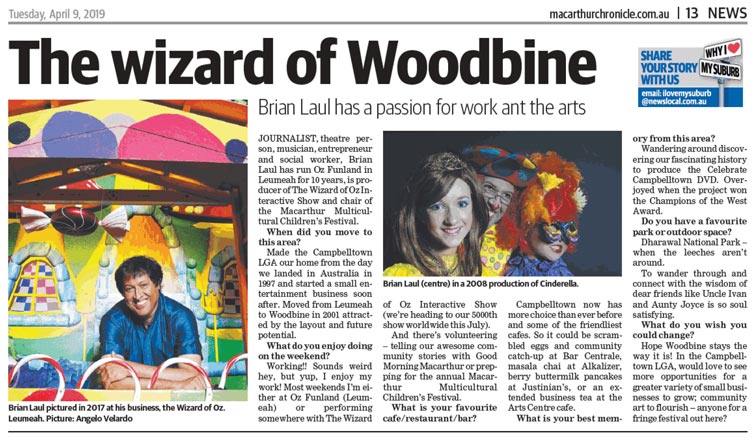 JOURNALIST, theatre person, musician, entrepreneur and social worker, Brian Laul has run Oz Funland in Leumeah for 10 years, is producer of The Wizard of Oz Interactive Show and chair of the Macarthur Multicultural Children’s Festival.

When did you move to this area?
Made the Campbelltown LGA our home from the day we landed in Australia in 1997 and started a small entertainment business soon after. Moved from Leumeah to Woodbine in 2001 attracted by the layout and future potential.

What do you enjoy doing on the weekend?
Working!! Sounds weird hey, but yup, I enjoy my work! Most weekends I’m either at Oz Funland (Leumeah) or performing somewhere with The Wizard of Oz Interactive Show (we’re heading to our 5000th show worldwide this July). And there’s volunteering – telling our awesome community stories with Good Morning Macarthur or prepping for the annual Macarthur Multicultural Children’s Festival.

What is your favourite cafe/restaurant/bar?
Campbelltown now has more choice than ever before and some of the friendliest cafes. So it could be scrambled eggs and community catch-up at Bar Centrale, masala chai at Alkalizer, berry buttermilk pancakes at Justinian’s, or an extended business tea at the Arts Centre cafe.

What is your best memory from this area?
Wandering around discovering our fascinating history to produce the Celebrate Campbelltown DVD. Overjoyed when the project won the Champions of the West Award.

Do you have a favourite park or outdoor space?
Dharawal National Park – when the leeches aren’t around. To wander through and connect with the wisdom of dear friends like Uncle Ivan and Aunty Joyce is so soul satisfying.

What do you wish you could change?
Hope Woodbine stays the way it is! In the Campbelltown LGA, would love to see more opportunities for a greater variety of small businesses to grow; community art to flourish › anyone for a fringe festival out here? 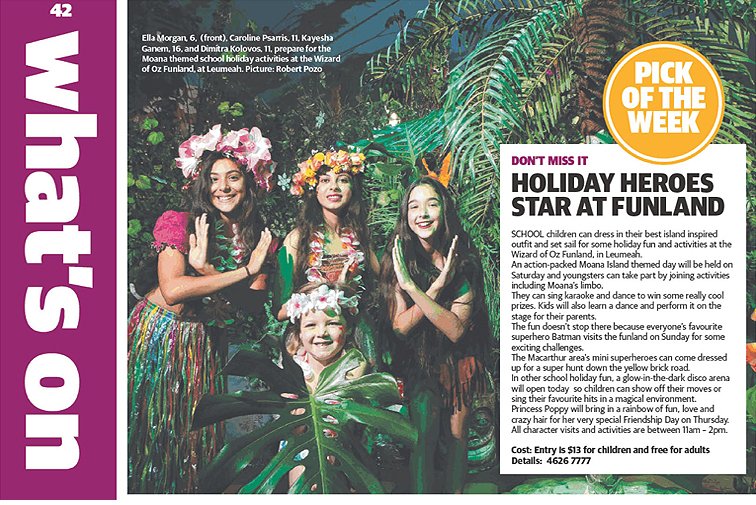 SCHOOL children can dress in their best island inspired outfit and set sail for some holiday fun and activities at the Wizard of Oz Funland, in Leumeah. An action-packed Moana Island themed day will be held on Saturday and youngsters can take part by joining activities including Moana’s limbo. They can sing karaoke and dance to win some really cool prizes. Kids will also learn a dance and perform it on the stage for their parents.

The fun doesn’t stop there because everyone’s favourite superhero Batman visits the funland on Sunday for some exciting challenges. The Macarthur area’s mini superheroes can come dressed up for a super hunt down the yellow brick road. In other school holiday fun, a glow-in-the-dark disco arena will open today so children can show off their moves or sing their favourite hits in a magical environment. Princess Poppy will bring in a rainbow of fun, love and crazy hair for her very special Friendship Day on Thursday. All character visits and activities are between 11am – 2pm. 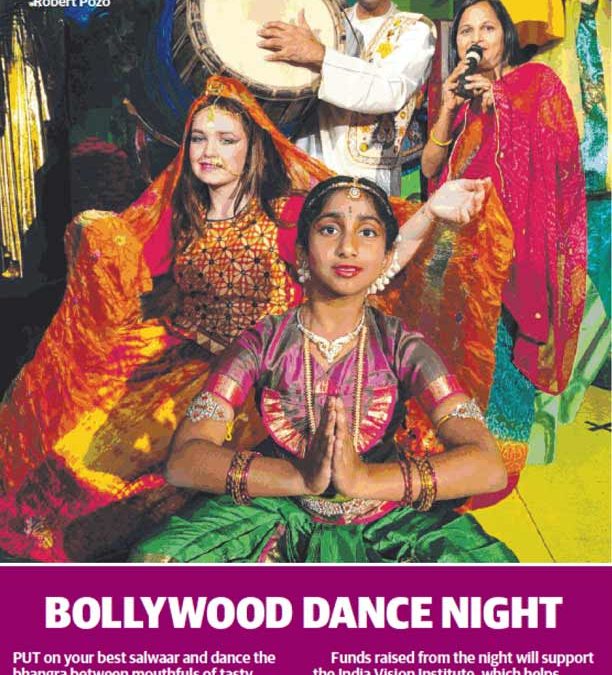 PUT on your best salwaar and dance the bhangra between mouthfuls of tasty biriyani at the Bollywood Dance Night at the Wizard of Oz Funland, at Leumeah, on Saturday from 6pm to 9pm.

If you’re brave enough, grab the microphone at karaoke and sing some Bollywood hits at the event. Funds raised from the night will support the India Vision Institute, which helps vision impaired children in that country. Singer Reshmi Kumar will perform and the night includes a fashion parade by An Ethnic Collection and Bag Bliss. Cost: $25 for adults and $11 per child. Price includes dinner. Details: 4626 7777. 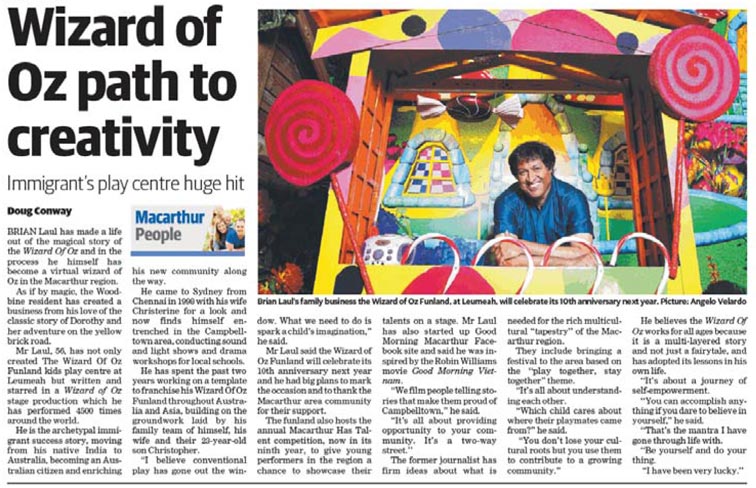 BRIAN Laul has made a life out of the magical story of the Wizard Of Oz and in the process he himself has become a virtual wizard of Oz in the Macarthur region.

As if by magic, the Woodbine resident has created a business from his love of the classic story of Dorothy and her adventure on the yellow brick road.

Mr Laul, 56, has not only created The Wizard Of Oz Funland kids play centre at Leumeah but written and starred in a Wizard of Oz stage production which he has performed 4500 times around the world.

He is the archetypal immigrant success story, moving from his native India to Australia, becoming an Australian citizen and enriching his new community along the way.

He came to Sydney from Chennai in 1998 with his wife Christerine for a look and now finds himself entrenched in the Campbelltown area, conducting sound and light shows and drama workshops for local schools.

He has spent the past two years working on a template to franchise his Wizard Of Oz Funland throughout Australia and Asia, building on the groundwork laid by his family team of himself, his wife and their 23-year-old son Christopher.

“I believe conventional play has gone out the window. What we need to do is spark a child’s imagination,” he said.

Mr Laul said the Wizard of Oz Funland will celebrate its 10th anniversary next year and he had big plans to mark the occasion and to thank the Macarthur area community for their support.

The funland also hosts the annual Macarthur Has Talent competition, now in its ninth year, to give young performers in the region a chance to showcase their talents on a stage. Mr Laul has also started up Good Morning Macarthur Facebook site and said he was inspired by the Robin Williams movie Good Morning Vietnam.

“We film people telling stories that make them proud of Campbelltown,’’ he said. “It’s all about providing opportunity to your community. It’s a two-way street.’’

The former journalist has firm ideas about what is needed for the rich multicultural “tapestry” of the Macarthur region.

They include bringing a festival to the area based on the “play together, stay together” theme.

“It’s all about understanding each other. Which child cares about where their playmates came from?’’ he said.

“You don’t lose your cultural roots but you use them to contribute to a growing community.’’ He believes the Wizard Of Oz works for all ages because it is a multi-layered story and not just a fairytale, and has adopted its lessons in his own life.

“It’s about a journey of self-empowerment. “You can accomplish anything if you dare to believe in yourself,” he said. “That’s the mantra I have gone through life with. “Be yourself and do your thing. “I have been very lucky.” 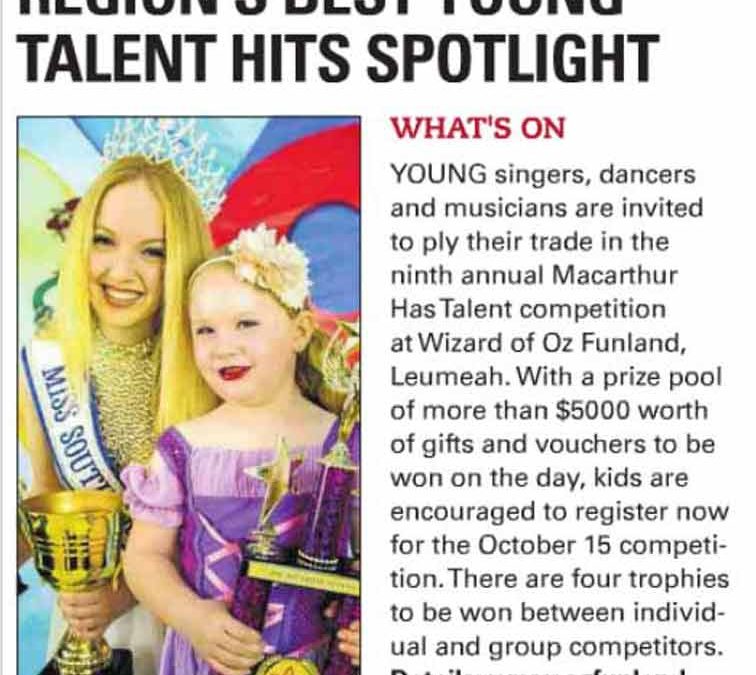 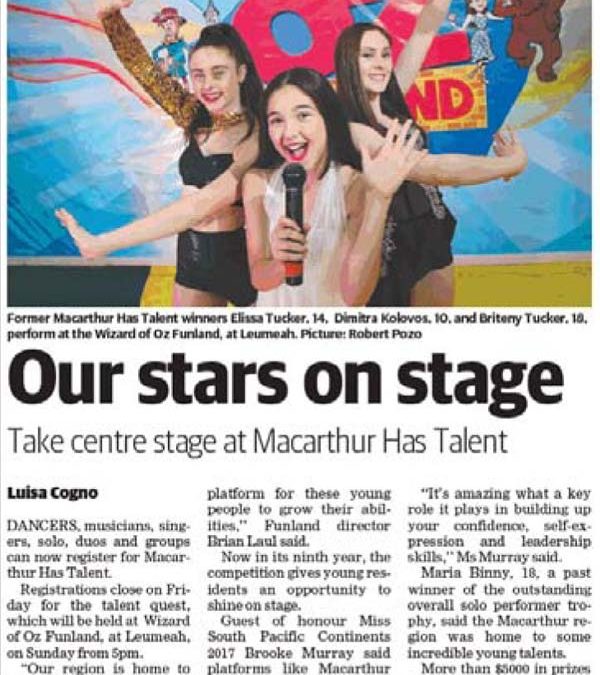 Registrations close on Friday for the talent quest, which will be held at Wizard of Oz Funland, at Leumeah, on Sunday from 5pm.

“Our region is home to some incredible young talent and we want to provide a platform for these young people to grow their abilities,’’ Funland director Brian Laul said.

Now in its ninth year, the competition gives young residents an opportunity to shine on stage.

“It’s amazing what a key role it plays in building up your confidence, self-expression and leadership skills,’’ Ms Murray said.

Maria Binny, 18, a past winner of the outstanding overall solo performer trophy, said the Macarthur region was home to some incredible young talents. 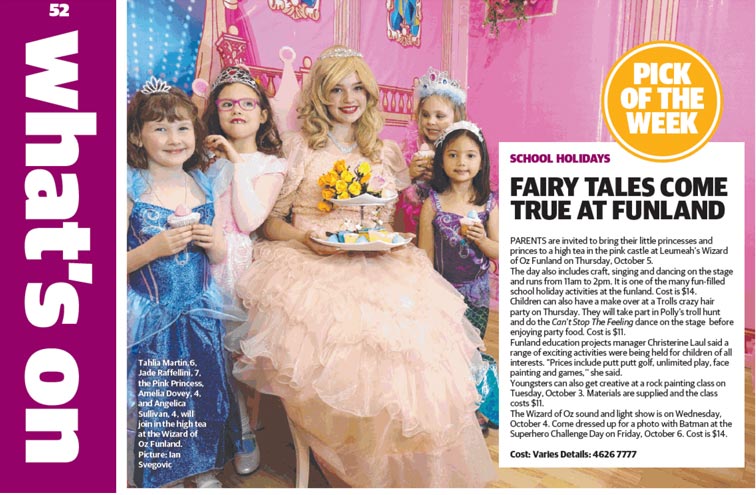 PARENTS are invited to bring their little princesses and princes to a high tea in the pink castle at Leumeah’s Wizard of Oz Funland on Thursday, October 5. The day also includes craft, singing and dancing on the stage and runs from 11am to 2pm.

It is one of the many fun-filled school holiday activities at the funland. Cost is $14. Children can also have a make over at a Trolls crazy hair party on Thursday. They will take part in Polly’s troll hunt and do the Can’t Stop The Feeling dance on the stage before enjoying party food. Cost is $11. Funland education projects manager Christerine Laul said a range of exciting activities were being held for children of all interests.

“Prices include putt putt golf, unlimited play, face painting and games,’’ she said. Youngsters can also get creative at a rock painting class on Tuesday, October 3. Materials are supplied and the class costs $11. The Wizard of Oz sound and light show is on Wednesday, October 4. Come dressed up for a photo with Batman at the Superhero Challenge Day on Friday, 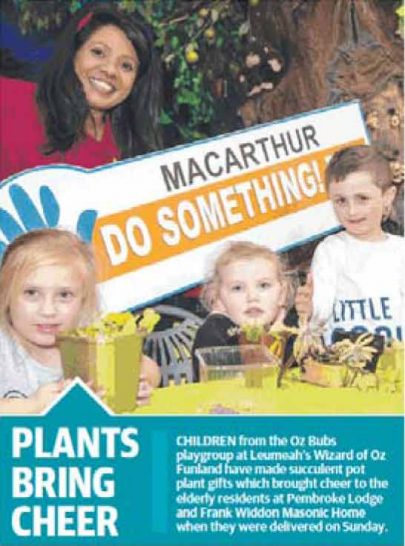 CHILDREN from the Oz Bubs playgroup at Leumeah’s Wizard of Oz Funland have made succulent pot plant gifts which brought cheer to the elderly residents at Pembroke Lodge and Frank Widdon Masonic Home when they were delivered on Sunday. 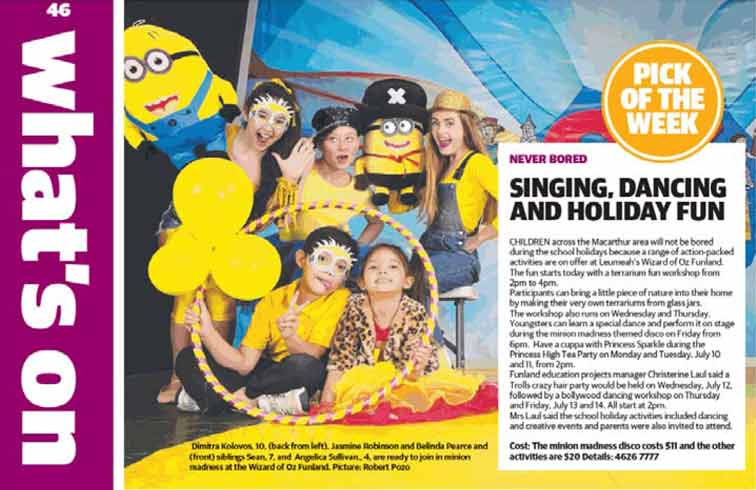 CHILDREN across the Macarthur area will not be bored during the school holidays because a range of action-packed activities are on offer at Leumeah’s Wizard of Oz Funland. The fun starts today with a terrarium fun workshop from 2pm to 4pm. Participants can bring a little piece of nature into their home by making their very own terrariums from glass jars. The workshop also runs on Wednesday and Thursday.

Youngsters can learn a special dance and perform it on stage during the minion madness themed disco on Friday from 6pm. Have a cuppa with Princess Sparkle during the Princess High Tea Party on Monday and Tuesday, July 10 and 11, from 2pm. Funland education projects manager Christerine Laul said a Trolls crazy hair party would be held on Wednesday, July 12, followed by a bollywood dancing workshop on Thursday and Friday, July 13 and 14. All start at 2pm. Mrs Laul said the school holiday activities included dancing and creative events and parents were also invited to attend. 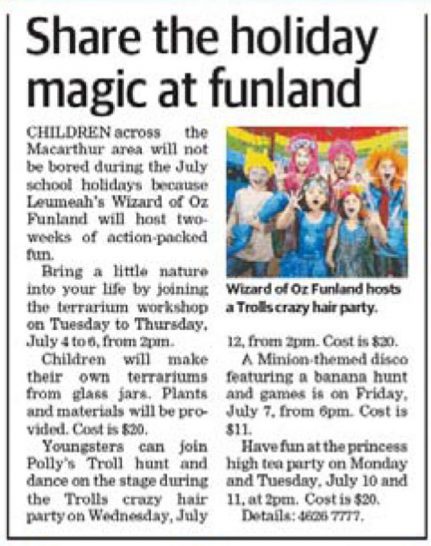 CHILDREN across the Macarthur area will not be bored during the July school holidays because Leumeah’s Wizard of Oz Funland will host two weeks of action-packed fun.

Bring a little nature into your life by joining the terrarium workshop on Tuesday to Thursday, July 4 to 6, from 2pm.

Children will make their own terrariums from glass jars. Plants and materials will be provided. Cost is $20.

Youngsters can join Polly’s Troll hunt and dance on the stage during the Trolls crazy hair party on Wednesday, July 12, from 2pm. Cost is $20.

A Minion-themed disco featuring a banana hunt and games is on Friday, July 7, from 6pm. Cost is $11.